To continue my tour of “town” I’ll take you on a tour of the Rec Tent which is where we chill on our down time and where our wash module is.  This is where most everyone keeps all their clothes, electronics and any beverages they don’t want to freeze in their tents.  There’s also shelves with books, games and exercise stuff like yoga mats and weights.  It’s where our spin bike resides, though only a few of us took advantage of that. 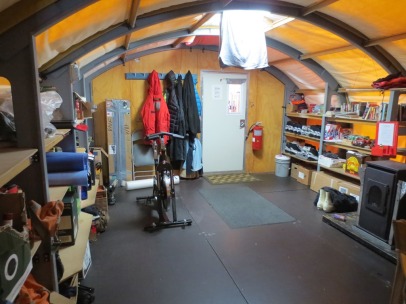 It’s fairly empty during the day when everyone is out and about working.  Sometimes the science crews or carpenters would hang here too when they were waiting around (sometimes for weeks) for their plane back to McMurdo would arrive.  In the evenings after dinner and Sundays you can usually find the camp staff relaxing and watching movies.  Sundays were sci-fi usually and Wednesday night was Bollywood night.  On occasion we might have a showing of a short film of someone wiping out on a snow drift in poor visibility conditions prior to the feature presentation of the night.  With a projector that we can hook up our computers to it most of us had external hard drives with tons of movies on them. 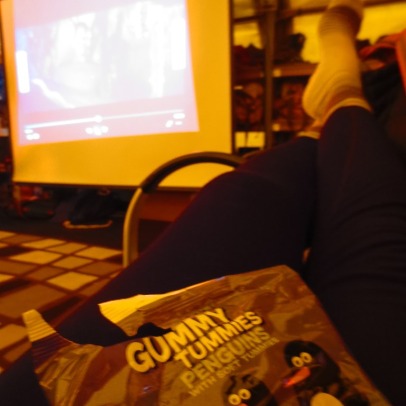 In the back of this tent is the Wash Mod (module).  This is where another snow melter is that we use for our showers, sinks and washing machine.  Yup that’s right, this was a “luxurious” camp.   However, it takes one giant bucket of snow for a 5 minute shower, three for washing your clothes.

In front of this tent is where the ski’s are and I can remember after a good storm having to dig these guys out.  However… I also remember on xmas, after getting two DVD’s of Seahawks games from mcMurdo, I pulled a comfy chair outside and watched some of the game in the Antarctic sub.  (For the record, the game was two weeks past but since there’s no email or internet I was able to pretend they were live).  Go Hawks! 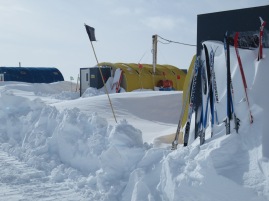