This is a really tough post to write.  I’ve always felt strongly against the waste problem we have in this world since the development of plastic and the issue of where our garbage is going.  I’m the girl who comes back from a leisurely kayak paddle with a bunch of plastic I picked up on the deck of the kayak.  It’s a big problem.  Back in Seattle I’m diligent about my compost/recycling/garbage sorting.  I remember my sister was once visiting and she would leave her “garbage” on the counter for fear of putting it in the wrong receptacle.

Coming to the island I knew I would be in the great garbage gyro of the pacific and I knew it would be upsetting to see what washes ashore.  Sure enough, it was disturbing.  While I got used to seeing it everyday, it was always still disturbing to see and it was difficult to walk the beaches without picking up garbage as I went along which gave me somewhat of a hopeless feeling.  I managed this by spending at least one day a week picking up at one stretch of beach between cargo pier and turtle beach.  I’d drag easily hundreds of pounds in an afternoon up to the seawall where I’d come back later in the week with a vehicle and take it to the “bone yard”.   When I told a friend back home about this, he called me Sisyphus.  Maybe I wasn’t making such a huge difference but it mad eye feel better all the other times I took walks on the beach and didn’t pick things up.  I referred to it as my beach body work out!

Ever hear of the terms flotsam and jetsam?  Flotsam is debris from a ship wrekage that floats to the surface while jetsam is unwanted material or goods that have been thrown overboard from a ship and washed ashore.  Theres more to those terms when it comes to maritime law.   Much of what washes ashore is likely from Asia.  It is amazing, not just the quantity of the garbage but what washed ashore.  I saw tires, tubes from monitors/TVs, glass bottles, plastic bottles, thousands of bottle caps. There were lighters, tooth brushes, handles from umbrellas, plastic toys and those foam letters from the kids playroom mats.  Debris from boats like ropes, baskets and plastic tubes and funnels from eel fishing.  The video below is of a pile of debris we picked up on an island beach clean up.   It took about 12 people in just over an hour to drag all this up to one pile, the results was a beautiful clean beach that lasted…maybe a day or so before more flotsam, jetsam and trash washed ashore.

Also buoys of all shapes and sizes and occasionally an old buoy made from glass. These were a rare treat to find and a treasure for sure.  I found a bunch of small glass balls around the size of a baseball, some smaller, some slightly larger, and also what they call a “rolling pin” which is also a buoy of sorts in in interesting shape.  The real treat is to find a large glass ball, like the size of a basketball or even larger.  Those are even more real and in the time I was there I only found one. 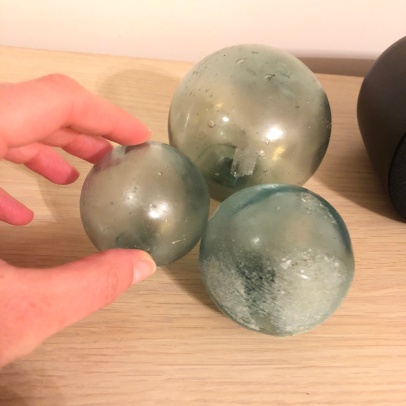